Intermittent fasting has been recently proposed as an eating pattern strategy to elicit, through the metabolic switch from the use of glucose as a fuel source to the use of fatty acids and ketone bodies, the improvement of insulin resistance, obesity, dyslipidemia, high blood pressure, cognitive functions, resistance to stress, suppression of inflammation, and increased life expectancy.

However, data supporting the beneficial effects of intermittent fasting mainly derives from preclinical studies on animals (e.g. bacteria, yeast, worms, and mice). The few clinical published studies on humans assessed only the short-term (weeks or months) effect of this intervention on weight loss and some non-communicable diseases risk factors, with no significant difference in these outcomes when intermittent fasting has been compared with moderate continuous energy restriction in humans.

To date, no data are available on the effect of intermitting fasting on clinically important outcomes, such as the onset of cardiovascular diseases, cancer, and life expectancy in humans. 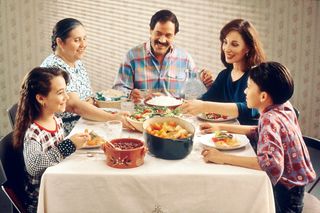 Several studies, on the contrary, found an association between delayed eating (i.e., spending many hours during the day without eating) and increased risk of developing episodes of overeating and binge eating.

For example, a laboratory experiment found that participants deprived of food for six hours consumed significantly more calories at the buffet compared to subjects in the one-hour food deprivation condition. Studies on binge-eating disorder (BED) have observed that patients with overweight and BED who ate three meals per day weighed significantly less, and had significantly fewer binge-eating episodes than those who did not regularly eat three meals per day. Moreover, regular consumption of breakfast, lunch, and dinner was significantly correlated with a lower body mass index in people with obesity and BED.

Research has also shown that dieting significantly predicted future weight gain in normal-weight individuals and was a risk factor for the development of eating disorders of clinical severity.

The most important evidence in favor of regular eating patterns, however, derives from the results of studies that assessed the efficacy and effectiveness of “enhanced” cognitive-behavioral therapy (CBT-E) for eating disorders.

CBT-E is based on a theory postulating that delayed eating and the adoption of extreme and rigid dietary rules are the most potent mechanisms maintaining binge-eating episodes. For this reason, a key procedure adopted by  CBT-E is “regular eating” that suggest patients planning in advance three main meals (breakfast, lunch, and dinner) and two snacks (mid-morning snack and mid-afternoon snack) and not eating between the intervals: a procedure also called 3 2 0.

Several clinical studies have shown that the regular eating procedure results in a rapid decrease in the frequency of binge-episodes in patients with bulimia nervosa and BED. For example, a study assessing the efficacy of CBT for bulimia nervosa found that participants who ate 80 meals and at least 21-afternoon snacks in the previous month reported the highest abstinence rate (70%) from binge-eating episodes. This finding was also observed in a study using CBT guided self-help in patients with binge-eating episodes.

These results led to affirm that regular eating is probably the single most important procedure in the treatment of eating disorders with binge-eating episodes.

In conclusion, there is no robust evidence that intermittent fasting produces additional clinical benefits, compared to healthy and regular eating patterns. Instead, there is some evidence that delaying eating increases the risk of developing episodes of overeating and binge eating. For these reasons, it is inappropriate to recommend intermitting fasting as a healthy eating practice.

Regular eating based on a healthy dietary pattern is the best choice to reduce the risk of disease and to avoid the development of unregulated and, in some cases, disturbed eating behavior.