Unity Biotechnology, Inc. (UBX) is a research stage biotech investigating therapies to combat various diseases of aging. As you might know, anti-aging research is enjoying a bit of a moment in the sun as several things have happened in recent years to bring attention to this emerging area of research. Unity is one of the few such companies that is publicly traded and is also beginning to advance part of its pipeline further into the clinic.

Unity now has 3 major potential catalysts coming up in the second half of 2020 that, if successful, could propel the stock’s valuation significantly upward. Although I typically focus on biopharma companies with at least 1 FDA-approved product on the market, I devote a small (

Personally, I first recognized that anti-aging research had reached a new level of public consciousness when a co-worker last year told me that they had recently picked up a copy of David Sinclair’s new book Lifespan: Why We Age—and Why We Don’t Have To. As a bookworm and biotech enthusiast, I had finished the book within a few days of its release, but I was frankly stunned when my friend with no particular interest in health and longevity had even heard of the book. The fact that it made The New York Times Best Sellers List is further testament to the book’s mainstream reach.

From an investment standpoint, the longevity market is seeing a similar uptake in interest. During 2019, two up-and-coming private companies, Life Biosciences and Juvenescence, both closed series B funding rounds of $50 million and $100 million respectively, and venture capitalist Sergey Young established a $100 million Longevity Vision Fund to invest in anti-aging companies. In addition to these private efforts, there is an increasingly large number of publicly traded entities in the longevity sector—11 by my count including Unity.

Also, researchers with the American Federation for Aging Research are raising money for a clinical trial called Targeting Aging with Metformin (TAME) that will test the common diabetes drug metformin to hopefully confirm the growing body of evidence that metformin use can prolong so-called healthspan by delaying onset of major diseases. The ultimate end-goal of the trial though is to convince the FDA to consider aging itself a targetable indication for approved treatments. Such a change would radically change the playing field for companies like Unity who currently have to test their drugs on a single disease indication even though their underlying mechanisms of action could often target much broader issues of aging itself through addressing common upstream issues.

Unity Fits Squarely Within This Sphere of Interest in Longevity

Modern longevity research recognizes 9 different hallmarks or major root causes of aging. Unity is developing therapies to target one specific hallmark—cellular senescence. Cellular senescence is a natural process that occurs when a typical, proliferating cell encounters some type of cellular stress. Essentially, cells have a built-in mechanism that arrests their growth in those circumstances which could be beneficial for instance to stop a cell that had acquired a cancer-driving mutation from reproducing.

This growth arrest is the start of the process of a cell becoming senescent. Senescent cells, though, display markedly different behavior from a normal, healthy cell. In addition to no longer reproducing, senescent cells eventually begin to secrete numerous different pro-inflammatory factors in what is called the senescence-associated secretory phenotype (SASP). The theory then is that these SASP factors are one of the root causes of aging and aging-related diseases by causing the surrounding tissue to become diseased as well.

Unity’s therapeutic approach then is to eliminate senescent cells from the target tissue, thus removing the pro-inflammatory SASP factors that are thought to be the true root cause of disease and allowing the otherwise normal, healthy tissue to function properly. If successful, this approach would be highly efficient, targeting a central cause of multiple negative disease factors with local administration to minimize side effects and infrequent dosing for convenience.

The first market Unity is targeting is the osteoarthritis market. Osteoarthritis is a disease desperately in need of innovation. Current therapies are solely focused on reducing pain rather than on eliminating or reversing any of the underlying causes. UBX0101 is Unity’s Phase 2 asset that is currently being tested for relief of symptoms in osteoarthritis. Results from testing UBX0101 in a Phase 1 trial showed that the drug improves patients’ pain by both upregulating factors related to remodeling and repair and by downregulating pro-inflammatory factors that lead to degeneration and pain.

Again, this effect is possible because UBX0101 targets a root cause of the reduced repair and increased degradation/inflammation—cellular senescence and the negative factors that such cells secrete into surrounding tissue. In addition to the osteoarthritis market, Unity is targeting disease modification through elimination of senescent cells in ophthalmologic vascular diseases as well as various types of fibrotic diseases. The furthest along of these programs are those for UBX1967/1325 targeting age-related macular degeneration (AMD), diabetic macular edema (DME), and diabetic retinopathy which should begin Phase 1 trials this year.

Phase 2 is the riskiest stage of drug development from a statistical standpoint. On average, only 52% of Phase 2 trials have a successful result. By contrast, Phase 3 trials are on average more successful with a 63% success rate (source for these statistics: The Pharmagellan Guide to Biotech Forecasting & Valuation). Thus, it’s easy to see how significant a positive Phase 2 result is on overall chance of approval. A positive Phase 2 result takes the overall odds of ultimate drug approval from about 18% to 35%. 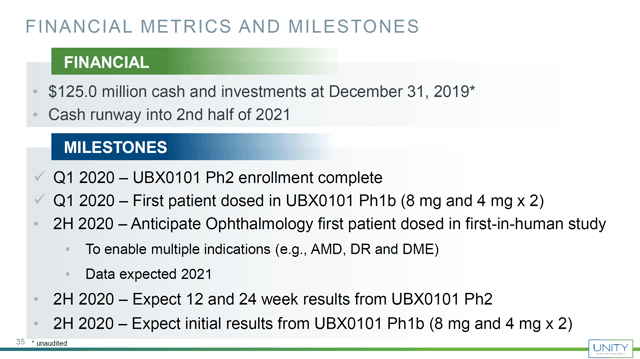 As you can see in Figure 4, this is exactly the type of de-risking that Unity hopes will take place for the company later this year. Unity expects to read out data from both its Phase 1b and Phase 2 trials of UBX0101. The 12 and 24-week results from the Phase 2 trial will include data from all primary and secondary endpoints.

Obviously with an average success rate of 52%, one should never feel too confident of a Phase 2 result until it’s reported, but it’s worth noting here that Phase 1 results for UBX0101 were strong and importantly were statistically significant at the dosage levels now being tested in Phase 2. 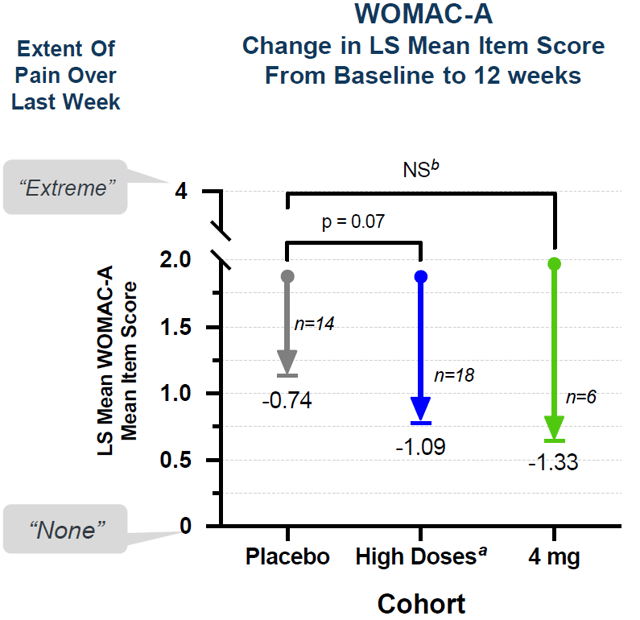 The data from Figure 5 is particularly important because this shows the statistically significant improvement in pain scores using the WOMAC-A measure that will be the primary endpoint in the ongoing Phase 2 trial. Additionally, 2 of the 3 dosing categories used in Phase 2 are encompassed by the High Doses category shown in Figure 2 (2 mg and 4 mg). Anything above a .5 decrease in pain on the WOMAC-A scale is considered clinically meaningful, so both the High Doses and 4 mg categories showed a strong effect size in Phase 1 on exactly the same measure that will be used in Phase 2.

First, I modeled Unity as it is today, with its lead asset still in Phase 2 and Phase 1b clinical trials. This model included factoring in R&D for all assets currently in Unity’s pipeline as well as the sales, general & administrative ((SG&A)) expenses that all biotech companies will have. I determined potential markets sizes for the company’s osteoarthritis and eye disease drugs and then determined the present value of Unity’s opportunity in each market, appropriately discounted for the risks associated with drug development as well as an additional 10% discount rate.

I chose not to model any of Unity’s other preclinical assets from a future revenue standpoint although I did factor in their development costs. I also calculated cash burn based on these eventually revenues versus the ongoing research and SG&A expenses.

For the osteoarthritis market, I started with a research group estimate of $10.1 billion in 2024 with a CAGR of 8.1%. I also assumed a peak market share of 19% which is what might be expected of a late entry into a competitive 5 drug market. This should be a conservative estimate given how significant of a step forward in treatment UBX0101 would represent if successful. I scaled in a 6-year launch curve to the peak, and also factored in the odds of approval which I currently estimate at 18%. The impact of these calculations is shown below in Figure 6:

Figure 6: Current Discounted Cash Flow Analysis of UBX0101 (source: data from Unity’s 10-K and corporate presentation and my calculations based on them)

By my count, total present value of the potential future cash flow from UBX0101 at a discount rate of 10% is $1.28 billion without any expenses yet factored in. For the ophthalmology indications, I performed similar calculations except that the odds of approval were lower for those 3 drugs, none of which have a positive Phase 1 result at this time. I estimated that number at about 12%.

Figure 7: Current Discounted Cash Flow Analysis of UBX1967 for Ophthalmology Indications (source: data from Unity’s 10-K and corporate presentation and my calculations based on them)

Totaling all of this up, you get a present value estimate of these future cash flows from both UBX0101 and UBX1967/1325 of about $2.88 billion, but before assessing a fair value stock price, expenses and cash raises need to be factored in. I did this by scaling up SG&A expenses from Unity’s recent 10-K and assuming that they would be at least 35% of total revenue once the company has drugs on the market. I also factored in R&D over the years based on estimates of necessary drug trials at an average cost of $4 million for a Phase 1 trial, $13 million for a Phase 2 trial, and $40 million for a Phase 3 trial. The results are shown in Figure 8:

Figure 8: Current Fair Value Estimate for Unity (source: data from Unity’s 10-K and corporate presentation and my calculations based on them)

As you can see, my calculations show a current fair value squarely within the range of where Unity has traded over the last year. Even factoring in a 20% margin of safety to that fair value still leaves Unity looking like a speculative buy at present purely from a present value standpoint given that the stock has been trading in the $5 and $6 range for the last few months. 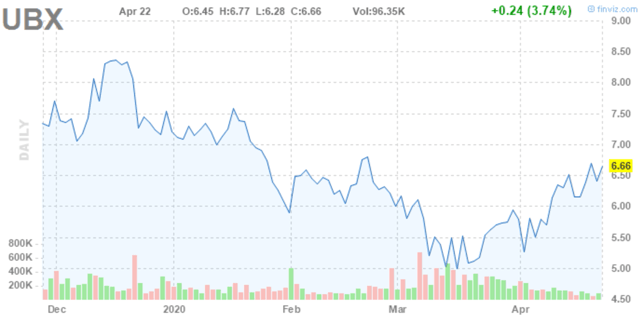 This opportunity comes with much higher risk and much higher potential reward though than what you would see with a commercial stage biotech. A failure in UBX0101’s ongoing Phase 1b or Phase 2 trials would cast substantial doubt on Unity’s entire pipeline, and thus it could easily eliminate most of the company’s market cap in the blink of an eye. That being said, eliminating the current risk posed to UBX0101 from these trials with positive data read-outs later this year would substantially impact my fair value estimate for the company. A positive Phase 2 readout in my estimate nearly doubles the odds of approval, from 18% to 35%. That alone drastically alters the results from my present value model of cash flows from UBX0101:

Figure 10: Discounted Cash Flow Analysis of UBX0101 with Positive Phase 2 Data (source: data from Unity’s 10-K and corporate presentation and my calculations based on them)

Because the odds of approval would roughly double on the heels of positive data, the present value of expected future cash flows would also roughly double. If you factor that additional cash flow into the overall model, you get a substantially higher present value for the company:

Figure 11: Fair Value Estimate for Unity After Positive Phase 1b and Phase 2 Data for UBX0101 (source: data from Unity’s 10-K and corporate presentation and my calculations based on them)

Trading at a valuation of a little over $1 billion wouldn’t be unreasonable for Unity if UBX0101 is able to advance into Phase 3. At that market cap, Unity would be trading at over 3x its current levels. While that sort of an increase won’t necessarily happen on Phase 2 success, it would certainly not be unprecedented within the biotech space, and even an increase of lesser magnitude could still be very significant for Unity investors. Accordingly, the potential upside to holding Unity stock through the 2H 2020 catalysts could be very meaningful to overall portfolio returns.