Salamanders are renowned for their regenerative capabilities, such as growing back entire limbs. We can’t pull off this biological trick, but new research highlights a previously unknown regenerative ability in humans — one held over from our evolutionary past.

Our bodies have retained the capacity to repair injured or overworked cartilage in our joints, says new research published today in Science Advances. Remarkably, the mechanics of this healing process are practically the same as what’s used by amphibians and other animals to regenerate lost limbs, according to the study.

“We call it our ‘inner salamander’ capacity.”

The scientists who identified this previously unknown human capacity are hopeful their findings could lead to powerful new therapies to treat common joint disorders and injuries, including osteoarthritis. More radically, this healing mechanism “might be exploited to enhance joint repair and establish a basis for human limb regeneration,” the authors wrote in the paper. 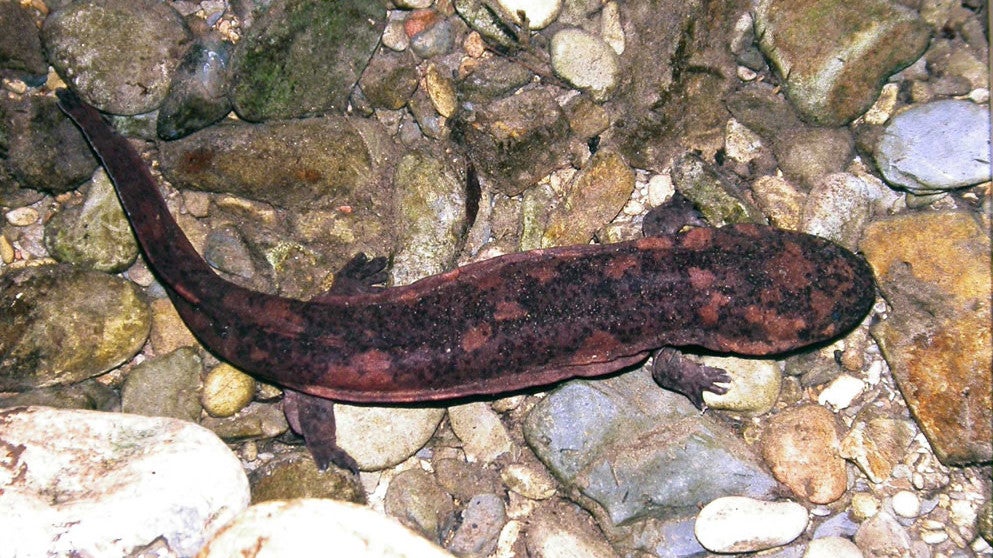 When Chinese giant salamanders are injured, they discharge white mucus from glands on their skin. As new research shows, this sticky salamander goo makes for an excellent medical glue, sealing wounds and encouraging them to heal.

Some animals, like axolotls, zebrafish, and bichir fish, are capable of regenerating different body parts. The axolotl is particularly special in that it can regrow its limbs, organs, and even portions of its brain. That humans cannot regrow entire limbs is hardly news, but scientists previously thought we were likewise incapable of self-repairing damaged and deteriorated cartilage in our joints. To further understand this apparent human limitation, scientists from Duke University School of Medicine and Lund University sought to determine how long proteins actually last in cartilage.

“This led us to the awareness that the cartilage proteins of the knee were in general younger than the proteins of the hip of people of similar ages,” Virginia Kraus, a professor of medicine at DUSM and a co-author of the new study, wrote to Gizmodo. “By younger we mean that they had accumulated fewer modifications of their structure that happen naturally over time with ageing. This led us to want to evaluate ankle cartilage and in fact, we found there, that same proteins were younger still,” she said, adding that, “Nothing like this had been observed before.”

This previously unknown capacity was discovered using proteomics, whereby scientists can investigate thousands of proteins at once using small samples. This led Kraus and her colleagues to learn that the age of cartilage proteins could be correlated to the body part in which they resided; the cartilage proteins, including collagen, in ankles were young, in knees they were middle-aged, and in the hips they were old.

This is a remarkable finding, in that a similar phenomenon is seen in animals capable of limb regeneration, as tissue repair tends to be more productive in the distal portions, that is, their extremities (e.g. tips of feet and tails).

“There is a concept in the appendage regeneration field that distal tissues are more capable of regeneration as compared to the proximal,” meaning interior, said Prayag Murawala, a postdoc at the Research Institute of Molecular Pathology in Vienna, Austria, in an email to Gizmodo.

“An example of this is the mouse digit tip regeneration,” said Murawala, who wasn’t involved with the new research. When the first finger bone of a mouse is amputated, it can grow back, he said, but when finger is amputated at the second finger bone it fails to regenerate. The new paper “strengthens this hypothesis by providing further evidence” that is “in-line with previous research.”

Interestingly, this could explain why, in humans, the hips and knees require more time to heal than ankles and why ankles are less susceptible to severe arthritis. As Kraus explained to Gizmodo, hips are twice as likely to need joint replacements, and evidence also exists showing that “ankles with osteoarthritis very rarely progress to a severe state of disease,” she said.

This regenerative process is regulated by a molecule known as microRNA. This molecule has proven to be very useful over the course of evolution, appearing in many types of animals. MiRNA controls “large sets of critical genes for tissue regeneration,” said Kraus, and it’s more active in animals with the capacity to regenerate entire limbs. MiRNA is also present in humans — a genetic holdover from our evolutionary past. We no longer use it to regenerate limbs, but it does help fix our damaged cartilage, according to this research. As the scientists demonstrated in the new paper, the activity of miRNA depends on its location in the body, with heightened activity in ankles compared to knees and hips.

“We were excited to learn that the regulators of regeneration in the salamander limb appear to also be the controllers of joint tissue repair in the human limb,” said Ming-Feng Hsueh, a DUSM molecular physiologist and the first author of the paper, in a press release. “We call it our ‘inner salamander’ capacity.”

Kraus said she is “very hopeful” that these findings will be translated to actual therapies in the future. Because miRNAs are very “druggable,” they could be “injected directly into a joint to boost repair to prevent osteoarthritis after a joint injury or even slow or reverse osteoarthritis once it has developed,” she said. And as the authors noted in the paper, miRNAs, along with other yet-to-be identified compounds “could lead to future use of a ‘molecular cocktail’ for attempted… limb regeneration in humans.”

“It is amazing to find that although we humans have separated from the axolotl 400 million years ago in evolution, there are many pathways that are commonly shared between human and axolotl.”

In an email to Gizmodo, Kenro Kusumi, a biologist from the School of Life Sciences at Arizona State University who wasn’t involved with the new study, said the “billion-dollar question” is whether the activation of miRNAs will “allow doctors to regenerate joints as a treatment for arthritis in the future.”

Randal Voss, a biologist from the University of Kentucky and an expert on the regenerative abilities of axolotls, said the new paper presents some “very interesting data about protein turnover and miRNA expression” pointing to an “underlying repair mechanism in humans.” Voss, also not involved with the new paper, said the “proposed” repair response in humans is vastly different than the repair method used by salamanders and other creatures “to regenerate cartilage wholesale in damaged joints.” The link to miRNAs in both cases is “interesting,” he said, “but we still have much to learn about the requirements of miRNAs in tissue repair in humans and regeneration in salamanders,” adding that “functional studies are needed to move these findings forward.”

“It is amazing to find that although we humans have separated from the axolotl 400 million years ago in evolution, there are many pathways that are commonly shared between human and axolotl,” Murawala told Gizmodo. “Although we still have a long way to go to explain why humans cannot regenerate, this study provides compelling evidence that there are many similarities in human and salamander limbs.”

Murawala said the new paper is “significant” and that it’s bound to have an impact on the field. Looking ahead, these findings will motivate researchers to focus on the distal portions of animals to determine why these parts regenerate better than proximal positions. A big question moving forward, he said, is “whether the distal environment is more permissive for tissue regeneration or distal cells are more capable of regeneration, or maybe both.” These and other questions will “hopefully one day answer whether we can promote tissue regeneration in humans,” he said. 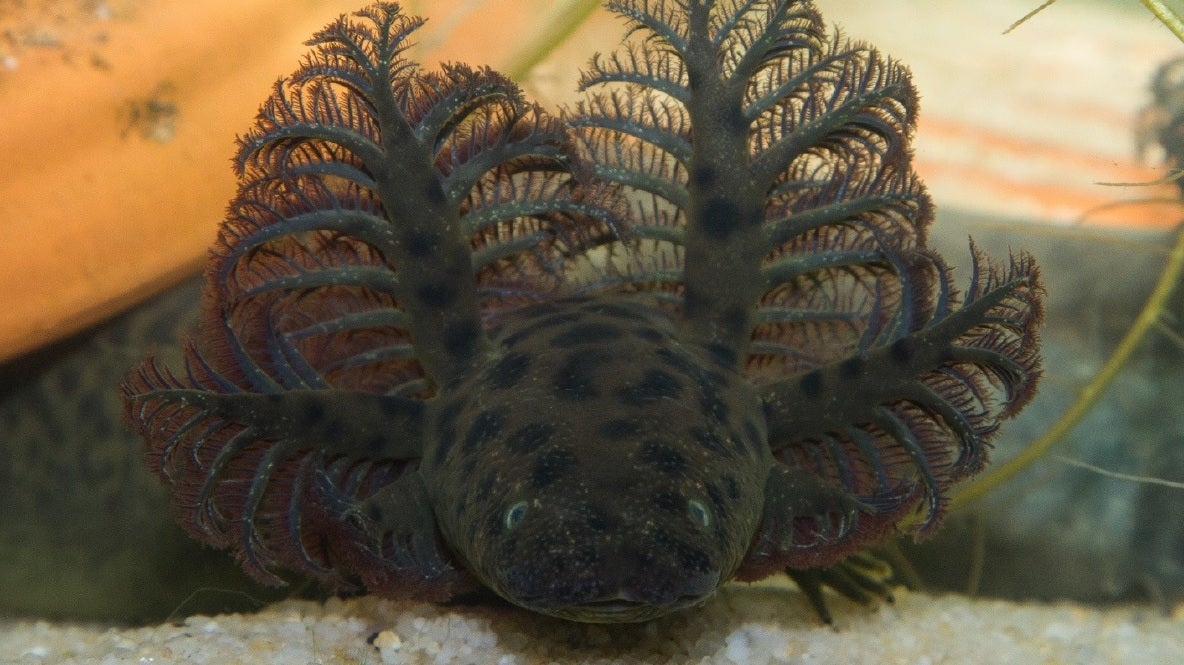 What has two short, chunky arms, a mane of feathery gills, and a sleek, green-marbled, eel-like body as long as your leg? No guesses? Meet the reticulated siren, a massive, two and a half foot-long salamander, described for the first time in a paper published today in the journal PLOS ONE, hailing from the remote, secluded wilds of *checks notes* southern Alabama and the Florida Panhandle.