Adient’s (ADNT) narrow focus on a low-value product, structural weakness in global automotive demand, and outbreak of Coronavirus make a strong case for lower prices. The company has embarked on selling non-core assets but this approach can only partially offset the headwinds.

A better quarter and untimely upgrade

Following a better than expected show in the first quarter earnings, Adient got an upgrade from Morgan Stanley. The Ireland-based automotive seating supplier divested and restructured some of its non-core businesses and this impressed Morgan Stanley analyst Adam Jonas. I’ll explain in this article that the upgrade is premature.

Earlier this year, Adient sold its Recaro seating business that specializes in premium aftermarket seating solutions. The niche business was acquired by Adient in 2018 but has poor profitability with a top line of just USD150 million in 2019.

A more meaningful development took place during the first quarter in the form of sale of its 30% ownership stake in Yanfeng Automotive Trim Systems (YFAI) to joint venture partner Yanfeng. The stake sale in China JV yielded USD379 million and will be used to retire a portion of Adient’s debt which stood at USD3.74 billion as of 31 December 2019.

These developments, coupled with the reduction in leverage ratio, impressed Morgan Stanley to elevate the stock to Equal-weight rating with a target price of USD27. The brokerage house also attributed the upgrade to an improvement in the seat structures and mechanisms business and stabilizing production in China.

Stabilizing production in China – did I read that right?

The last bit will naturally raise eyebrows as the ongoing health scare in China due to Coronavirus has thrown a spanner in an already weak automotive demand scenario. The situation is so bad that car sales plummeted 80% in February according to the China Passenger Car Association (CPCA). Needless to say, this is the sharpest fall in many years. The association also said that wholesales from automakers to dealerships declined 86%, underlining a close relationship between demand and production.

To be fair to Jonas, there was no way for him to figure out the likely impact of Coronavirus in early February when he penned his research. The virus outbreak is purely a black swan event and as it happens with such incidents, these can’t be predicted. Nevertheless, even in the absence of this black swan event, there are many factors indicating more downside in Adient.

While essential, an automotive seat isn’t the high technology product which can fetch high margins to its suppliers. It is not difficult to understand why it is so.

Once equipped in a car, a seat is usually good for lifetime and thus, has limited replacement demand. As a result, the best way of leveraging economies of scale in this product is by supplying seats directly to OEMs. While this route offers high volumes, it comes with competitive prices and thin margins!

Automotive seats are bulky products and thus, it is not possible to take advantage of global sourcing. Since the transportation costs of seats and seating systems from optimum cost countries would be very high, these products are best manufactured and supplied from plants close to vehicle assembly facility. This means more number of plants, each being small in size and capacity and inherently inefficient. According to its website, Adient operates 214 manufacturing plants in 32 countries.

PS – The running joke in this regard has been Chrysler’s attempt to source Jeep Wrangler seats from India in 2008, only to promptly cancel the contract. There is a strong reason we don’t see such deals regularly.

Declining car sales across the globe lead to softer margins

It wouldn’t be a stretch to say that the global automotive market is caught in the cross hairs of some tectonic shifts. Demand is suffering due to the rise of services such as Uber (UBER) and Lyft (LYFT) which have changed the mobility model from vehicle ownership to renting. While this megatrend alone is quite potent, developments in other walks of life such as home delivery of essential services are also greatly diminishing the value in vehicle ownership. In varying degrees, this megatrend is playing out in most markets and its impact is manifested through softer demand of new cars.

Since OEMs are known to extract best value from their suppliers, one can imagine that these pressures grow further during the times of sluggish demand. As such, it is no surprise that profit margins for seating business have come down in recent years for almost all the major players. The following table contains relevant information for the seating division of leading players.

Quite clearly, Adient – despite being the largest player – is at the bottom of the pile in terms of profitability while other players have better numbers to show even though their figures also deteriorated in 2019. In the first quarter 2020, Adient has put a better show, boosting its adjusted EBIT margin to 5.5%, but it still trails its competitors and the debt pile on its balance sheet and sustained sluggishness in the end-use markets will ensure it remains behind its peers.

The trouble for Adient shareholders is that seating is the only business for the company. At the same time, its competitors have other high-margin businesses, effectively offering better ways to balance pricing pressures and industry downtrends. Lear (LEA) has a smaller but more profitable business of electrical distribution systems to its rescue. Similarly, Magna (MGA) offers products related to body exteriors, power and vision. To its credit, Faurecia (OTCPK:FURCF) has products in clear mobility and gained a slice of advanced cockpit electronics and Advanced Driver Assistance System (ADAS) through acquisition of Clarion Electronics last year.

Just a look at this graph is enough to understand the gap between Adient and its competitors. These are consolidated EBIT margins, which include the performance of other divisions.

While Adient is markedly behind its major competitors in terms of profitability and revenue growth, it surprisingly trades at expensive valuations. Here is another look at its revenue growth in recent years, margin and return ratios and this table makes it clear that Adient should be trading at a discount to its peers. 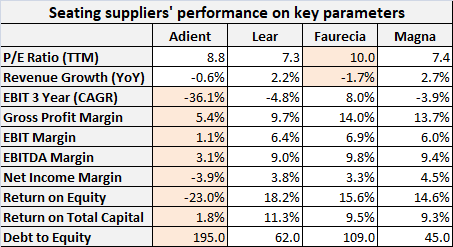 Even if we discount the past performance and crystal gaze the situation a few years from now, Adient offers little hope due to its narrow focus on one product and the limited scope of additional value to be created in this product line. As mentioned above, its competitors have a more balanced approach and a few are even trying to diversify into higher margin products.

Given these structural challenges, Adient has no other choice but to get more aggressive on cutting and optimizing costs in order to survive. The situation is already quite bad for the company as interest expense took away a whopping 48% from its operating income in the latest quarter – a timeframe when it turned in better performance and had Selling, General and Administrative (SG&A) expenses under control. Simply put, Adient has to keep running to just remain in the same place.

Unfortunately, no recovery in automotive demand is in sight this year and this will have significant implications for a debt-laden, low-margin player like Adient. With car sales and production volumes going down, it is natural that supplier margins will take a hit as manufacturers will struggle to proportionately reduce their overhead costs.

Sure enough, Adient has hinted its 2020 adjusted EBITDA to be on the lower side of its earlier guidance of USD870 – 910 million. However, this outlook is based on the expectations of full-year revenues to be in the range of USD15.6 billion to USD15.8 billion and a 2% reduction in global automotive production to 87.8 million units with production in China remaining unchanged at 24.5 million units. 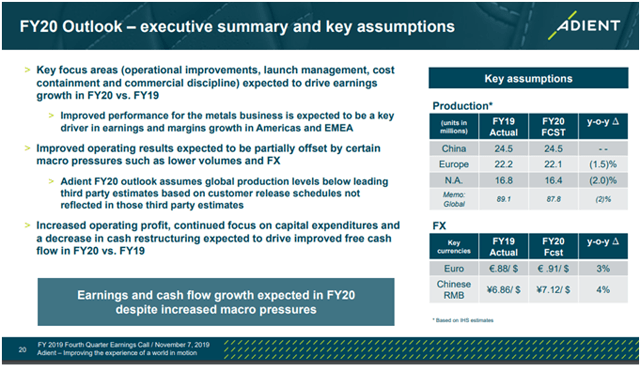 Anyone tracking the automotive industry would be able to tell how unreasonable these assumptions are, especially the one for China which is the biggest market and struggling with poor demand. Even before the impact of Coronavirus, the China Association of Automobile Manufacturers (CAAM) expected a 2% decline in vehicle sales for 2020 and Adient competitor Lear also expected a similar drop in Chinese vehicle production.

No longer a production issue

The Coronavirus outbreak has only compounded the problems for the industry. Automotive industry forecaster IHS Automotive expects as much as 32% decline for the first quarter production in China. We are already in the second week of March, and while some automakers have restarted production, a vast majority is not yet there.

More importantly, it is no longer a production issue for the industry now as demand has also crippled! So even after plants open, it remains to be seen how many buyers turn up to purchase cars. As the industry gathers more clarity about the damages in the coming weeks, one should fully expect automakers and suppliers to reveal lower guidance for the year.

In my earlier article about BorgWarner, I had contended that mis-priced but fundamentally sound businesses can’t continue trading at depressed valuations. Such businesses either attract investors willing to offer premium valuations or get new owners. Unfortunately, Adient is too big to be acquired by a rival and its singular focus is unlikely to prompt investors to offer better valuations through the year. Under new CEO Doug Del Grosso, the company is working towards divesting non-core operations and recently sold its fabric manufacturing business to Asahi Kasei for USD175 million. While such steps are in positive direction, these will only be able to partially offset the negative impact of headwinds. In short, these turnaround efforts are likely to take longer before investors see an earnings recovery.

The stock has given up most of the gains made after issuing strong outlook and given the structural challenges, I expect it to remain under pressure in the coming months. I wouldn’t like to set a target but fully expect the stock to reach low teens during the year.

Disclosure: I/we have no positions in any stocks mentioned, but may initiate a short position in ADNT over the next 72 hours. I wrote this article myself, and it expresses my own opinions. I am not receiving compensation for it (other than from Seeking Alpha). I have no business relationship with any company whose stock is mentioned in this article.

Editor’s Note: This article discusses one or more securities that do not trade on a major U.S. exchange. Please be aware of the risks associated with these stocks.